Two stroke gasoline engines need to be tuned to run properly. Until very recently I had no idea how to do this and while I'm still no expert, the understanding is coming.

This page aims to instruct the complete newcomer to gas on how to tune his or her engine. The problem with a lot of the tuning advice I've come across is that it's geared to those who already have an understanding of the process. For a starting point I needed very specific and detailed instructions; finding them was a matter of research and a lot of questions to many people.

A few words about carburetor needles, where the magic of tuning happens. 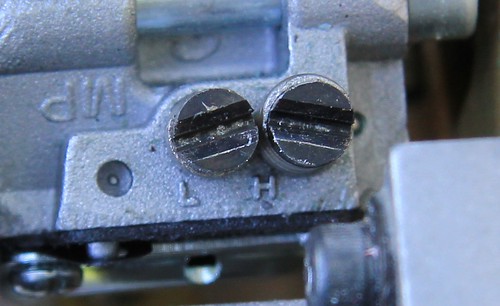 Should you tune the engine with it off, or running? There are two schools of thought on the subject. I belong to the latter because it's much quicker and easier to see and hear how my inputs affect the tune of the engine. Please note that I am highly focused and very careful when working near a spinning propeller. All of my gas engines have tubes that run through the cowl to the needles to guide a screwdriver - one less distraction. I will not advise you on which method to use - that's a decision you'll have to make for yourself.

The flowchart (my own) is based on a process shared with me by Ralph Klopping, known as RTK on RC flight forums. Thanks, Ralph! 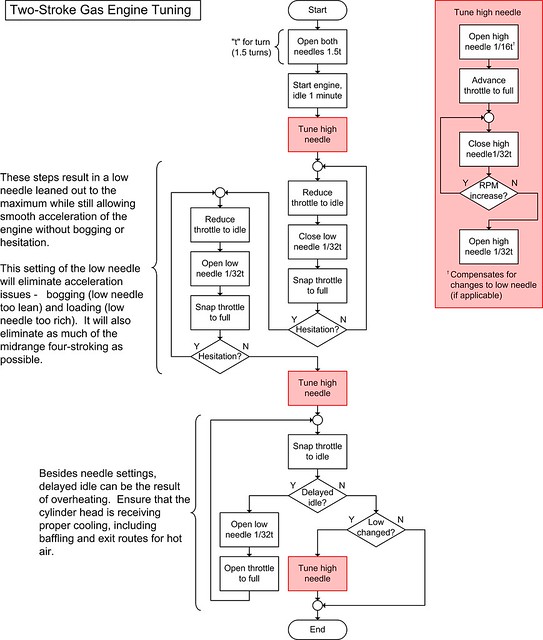 My first step is to tune the engine on the ground, running. The engine may behave differently in flight, so I use the process again after each test flight with the engine off; there's no point having it running on the ground when you're tuning for in-flight conditions. Many test flights might be required to get the engine performing properly. And it should be noted that it's preferable to run the engine a little too rich than too lean.

If tuning the engine by the needles doesn't get it running right there could other problems - timing, ignition, fuel system, to name a few. That's outside of the scope of this tutorial - at least for now.

If you have questions that are not covered here, stop by the Contact page and drop me a line. I'll do my best to help.