Whether you're building or flying it's helpful understand the consumables that dictate the length of a flight or a day at the field; the sections below explore each aspect in more detail. 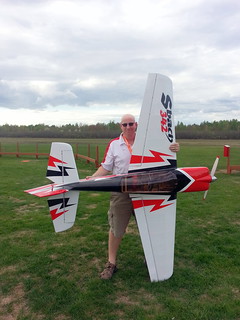 You may not think of yourself as something that gets used up, but RC flying takes a great deal of concentration and there is a limit to personal endurance. When building an airplane this is something to consider when selecting a gas tank and batteries. There's no point in adding the weight of unburned fuel or unused battery capacity (though a small buffer is a good idea).

Personally, 10 minutes is about as long as I want to fly at a time so I choose my fuel system based on this and other data I've gathered; see Gas Consumption, below. You may decide on a flight time in advance, or choose to base your flight times on available fuel. Most of my planes have the capacity for at least a couple of extra minutes so if circumstances prevent me from landing immediately after 10 minutes have passed, I have a reserve.

It varies for me. I usually like to relax and unwind between flights so, traffic permitting, two or three flights in a hour is about my pace. I very rarely fly more than five times in a single day. So I need transmitter, receiver and ignition batteries that can operate under load for 50 minutes before they'll need recharging, and I need a gas tank big enough for 10 minutes of flying. I also need to bring enough gas to fill the tank five times. 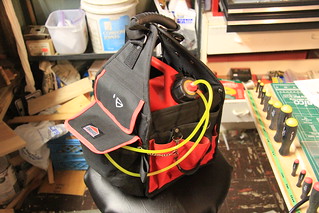 Consumption varies widely with flying style and throttle use. A 30cc aerobatic plane may use twice the gas of a 30cc trainer for flights of the same length. Since I started flying gas-powered planes I have tracked how much fuel I use to arrive at an average rate of consumption for each plane. The more data I gather, the better I'll get at planning fuel systems for new planes.

Data is gathered in two steps. First, a constant is set for each plane: How many cranks of the fuel pump it takes to fill the fuel tank from the gas can. That number is divided into the size of the gas tank to calculate the amount of fuel delivered for each crank of the pump (mL/rev). Second, the duration of each flight is noted along with the number of cranks (multiplied by the calculated mL/rev) it takes to refill the tank. The result is fuel consumption in mL/m, averaged out over all flights of each airplane in the table below.

With the Pulse 125 I used the provided tank; with the others I chose my own. Before the Cessna 150 I had given only a passing thought to choice of gas tank size, trying to match it to engine size. This data now helps me choose more carefully.

This part is just math - multiply the number of hours you'll be at the field by flights per hour, then by the size of your largest fuel tank. Bring at least that much gas. For example, two hours at the field at two flights per hour is 4 flights, multiplied by a 500mL tank = 2L of fuel. 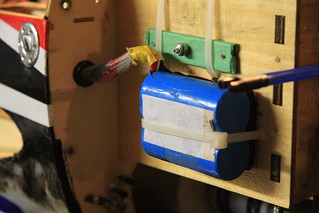 The biggest difference between gas and battery capacity is pretty obvious - the tanks is easily filled from the jug, but many people (myself included) the battery is only recharged after the flying is done for the day.

This data is also gathered in two steps. First, the battery capacity is noted for each plane. Second, the battery is charged after each day at the field and the capacity returned to the battery is divided into the number of mintues flow (mAh/m). For self-draining battery technologies like NiCd and MiMH it's important to charge the plane as soon as possible for an accurate reading. With chemistries like LiFePO4 and A123, it's not crucial.

My own NiMH records vary widely, probably because I was not diligent about charging batteries immediately after a flight. For that reason I present only the data from my A123 batteries. I use A123 in my newer planes and I will eventually replace the NiMH batteries in my older models.

1For the purposes of this comparison I have combined the capacities of receiver and ignition batteries. While not useful in tracking individual battery consumption, this approach was helpful to me recently in choosing a single battery for a new airplane that will be equipped with a battery elimination circuit and a single A123 battery. For the sake of interest, my receiver packs use an average of 57% of the combined capacity of both batteries, with the ignition packs using about 43%.

I used a single A123 battery with a battery elimination circuit in both the Cessna 150 and the Super Stearman. Those times are a lot closer to my requirements for a day at the field.

More math. Multiply the number of hours you'll be at the field by the number of flights per hour, then by the number of minutes per flight and your average power consumption rate. For example, two hours at the field with two flights per hour is four flights. Multiply that by 10 minutes per flight: 40 minutes, which multiplied by a consumption rate of 50 mAh/m is 2000 mAh. Of course, that's straight math and does not allow for battery chemistry and how much capacity you can safely use. From my own data I see that I have never used more than 40% of any battery's capacity at before recharging.

Learning about rates of consumption of fuel, of batteries and of my own concentration has helped my build airplanes better suited to my own flying needs.