In the spring of 2011 I had a lengthy back-and-forth with the Chief Flying Instructor (CFI) at Stetson Flyers here in Ottawa during which he patiently answered my steady stream of questions. I joined the club (and MAAC), signed up for flying lessons and bought this plane for flight training.

I chose glow over electric at the CFI's suggestion. Glow powered engines do require tuning, cleaning and support equipment, but they do not require a complex charger and one or more large batteries that must be charged before every flight. Since I would be flying several times on training days, glow was the choice for me.

The Hobbistar is available as an Almost Ready to Fly (ARF) package, but this version came Ready To Fly (RTF). Well, theoretically. I had to put a few hours of work into the assembly, including the repair of the aileron servo tray. But it came with the transmitter, receiver, batteries, chargers, engine, propeller... just about everything except fuel.

There were several reasons why I chose this plane over the many other trainers that were available:

It was an excellent plane to learn on and the instructors at the club flight school were great. Midway through 2011 I soloed in front of the CFI to earn my wings. What a rush!

I flew the Hobbistar all through 2011 and equipped it with skis to fly in early 2012. Early in the spring that year I made an error in distance judgement and flew the plane into a tree. The wreckage sat in the basement until the fall of 2012, when I spent a lot of time repairing the extensive damage to the wing. After that was done, I converted it from tricycle gear to a tail dragger.

I re-maidened the plane in March of 2013 on skis and it flew perfectly well. However, I had forgotten what a mess glow fuel makes - when I purchased an RCGF 32 in 2013 I decided it would go into my Pulse 125 and the DLE 20 would go into the Hobbistar. At the same time I converted the wing - from single to dual aileron servos, and from band-on to bolt on. I also fabricated some all-season skis, and just after this photo was taken I fabricated a cowl as well. 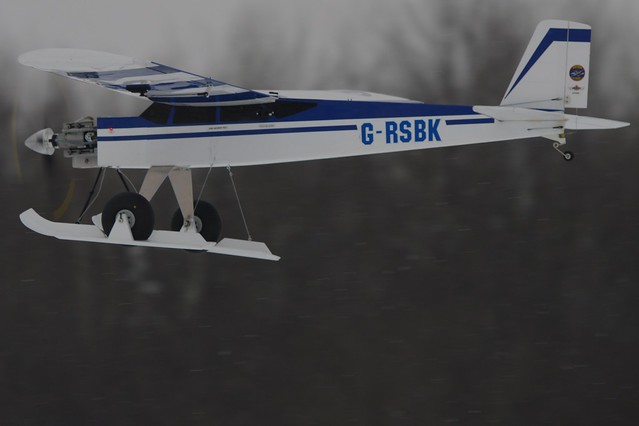 in 2017 I gutted the Hobbistar, reducing it to a bare airframe. It may fly again... someday.

*Performed by me as opposed to an instructor