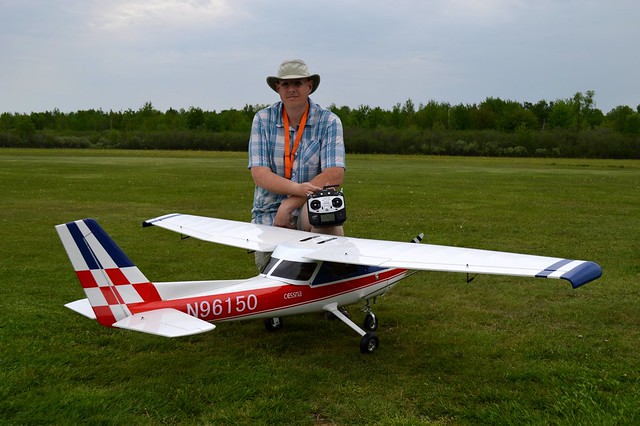 Welcome to grosbeakRC. I created this site for two reasons:

RC flight welcomes you. The hobby is filled with friendly folks are who are willing to help you get started, and to help along the way. It's a chance to build new skills and to immerse yourself in aviation from a unique perspective. And once you get some experience you can give back to the hobby, which is very rewarding in itself.

I got my start in RC flying on December 25th, 2010 when my darling wife gave me a park flyer for Christmas. I spent a lot of time online learning what I could and practicing with a simulator. In the spring of 2011 I took to the air for the first time and it was a thrill I'll never forget.

Around the time of my first flight, I realized that I could really benefit from some instruction. Most clubs offer it to their members, so I contacted a local club. I talked to the Chief Flight Instructor (CFI) and learned that to get the most out of the experience a more advanced trainer would be a big help. I thought about it for a while, then decided to purchase a glow-powered trainer.

Starting in May of 2011 and for most of the summer I was at the club every Tuesday night, getting plenty of flights in with club instructors and having the time of my life. The instructors were helpful and freely giving of their time, and under their supervision I improved to the point where later in the summer, knees knocking, I flew solo under the watchful eyes of the CFI. It wasn't perfect, but it was good enough. Now I had my wings, but I continued to come for Tuesday night instruction to improve my newfound and somewhat shaky skills.

As the end of the flying season drew near I was still having a blast flying my trainer but I was ready for a new challenge. I bought a low-wing sport plane and during the winter I spent some time putting it together and installing the components, including a gas engine. After a nervous maiden flight in the spring of 2012 I had a lot of fun flying it that spring. When a member of the club announced the formation of an Aerobatics Interest Group (AIG), I signed up. In the summer of 2012 I participated in my first IMAC competition and had a great time.

In the fall of 2012 and looking forward to 2013, I caught a deal on a used aerobatic plane. I've flown it many times and it's a lot of fun, though I haven't been able to put in enough practice to compete again. Over the winter of 2013 and 2014 I converted my only glow plane to gas; gas engines now power all of the airplanes in my small fleet.

In 2014 I didn't get in a lot of flying time, but 2015 was better. Over the winter I built my first kit - I enjoyed the process immensely and enjoy flying it all the more. With a young family and a busy summer schedule I haven't been able to give competition aerobatics the time it deserves, so I sold my aerobatic plane.

Over the winter of 2015/2016 I built a 1/4 scale Cessna 150 - my largest plane and the first with flaps. It's a pussycat in the air. And over the winter of 2016/2017 the project was a Super Stearman... another scale model, my first biplane and a lot of fun to fly. Since then I'ev started experimenting with Gyros, my go-to beign the Aura 8 AFCS. I've put one in my Pulse 125 and Super Stearman.

It didn't take me long to realize that I love working in the shop just about as much as the flying. Building, modifying, repairing and maintaining my airplanes is a favourite way to spend my time - something about the cooperation of head and hands soothes my soul. I've also discovered that I very much enjoy documenting what I do, so just about everything gets photographed and written up.

Mostly I fly when it's warm and putter when it's not, but sometimes the roles and seasons get reversed.

I have all the nose I need and then some. Early in our relationship, my wife nicknamed me grosbeak after the family of large-beaked birds of the same name.

It kind of stuck. I figured the name of a bird was an apt call sign for an RC pilot. It's become my screen name on the online forums to which I belong, and has evolved into a logo and, sans vowels, the registration letters for most of my airplanes. I couldn't think of a better name for this website.